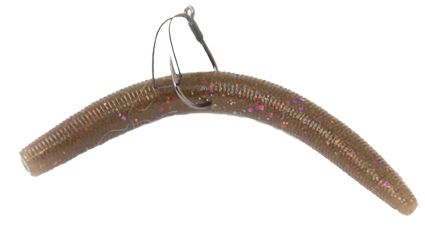 The wacky rig is a very popular way to rig a rubber worm. This is when the hook is centered on the body of the worm, causing the to sag evenly on both sides. Sometimes anglers will prefer the hook to be off-center but most of the time it’s centered.

At first impression this is a very silly looking rig, but it’s seriously one of the most effective worms rigs you can use. This is such a great style of bass fishing for beginners because it’s so easy to rig and fish. And at the same time seasoned fishermen use it all the time, especially when there’s a tough bite.

There are a few different ways to rig a wacky worm. The first way is to simply pierce the hook through the center of the worm. The biggest problem with rigging wacky worms this way is they get torn up pretty quickly, and you can find yourself burning through worms way too fast.

That was always the traditional method to wacky rig a worm, but as the rig gained popularity more effective ways emerged. Now, more often than not, you’ll see fishermen using o-rings to wacky rig.

An o-ring is small rubber ring that slips over the worm so that the hook can attach to it instead of piercing the worm. Some anglers choose to still pierce the worm so that the ring acts as the reinforcement. The rings are put on with an o-ring tool that can be found just about anywhere that sells tackle.

The only difference with using the o-rings on a wacky worm is the hook the hook now runs parallel with the bait instead of perpendicular. It doesn’t make much a difference in presentation but some anglers prefer the hook to be perpendicular. If you are one of those anglers then you can achieve this by crisscrossing two o-rings. It’s hard to explain but the photo shows it pretty clearly.

There are also wacky weights that will keep the bait perpendicular, while also adding some weight to the rig. Although wacky worms are often fished weightless, there are times when some weights will be needed.

If you’re fishing on a windy day or trying to get down in to some deeper water, then you should be adding some weight to your wacky worm. There are different ways to add weight to a wacky worm but these style tungsten weights work well.

The kit includes everything you need to wacky rig worms, perfect for someone just starting out. The video below unboxes the kit and explains what’s in it.

The most popular worm for a wacky rig is the Senko worm made by Gary Yamamoto. These baits come in sizes ranging from three to seven inches. With that said, the most commonly used sizes are four or five inches.

This bait became so popular that after it came out, pretty much all rubber worm companies made their own versions of it. For example YUM Bait Company and their YUM Dinger. Some anglers will use other style worms but the one thing they will all have in common is they are all stickbaits.

Over the years the wacky rig became such a commonly used rig that most hook companies now offer a full line of wacky rig hooks. They are usually shaped like circle hooks, and will either have a weedguard on them or won’t.  That’s the first decision you need to make, and it’s a pretty simple one.

If you’re fishing weedy areas you should definitely use one with a weedguard. A really good quality wacky worm hook is the Finesse Wide Gap Hook made by Gamakatsu. Gamakatsu makes great hooks but they’re pretty expensive. If you’re looking for a less expensive weedless wacky hook then check out the Fusion19 Hooks made by Berkley.

If you can get away with using a non-weedless hook then by all means use it, it’s only going to help your hook up ratio and they’re cheaper. Both of the hooks mentioned above make a non-weedless version, Fusion19 and Finesse Wide Gap.

How To Fish A Wacky Rig

Wacky rig fishing is very well known for being a finesse fishing tactic. This means light tackle, usually a spinning reel spooled with light line. But a wacky rig can also be fished with heavier gear too, like a baitcaster with heavier line. This is the first distinction you need to make, then you have to select a good rod.

A seven foot spinning rod with medium power and fast action is perfect for fishing a wacky worm. St Croix Mojo rods are excellent sticks for fishing wacky rigs and most other worm rigs.

Just about any good spinning reel will do, and it should be spooled with monofilament or fluorocarbon line. A lot of anglers swear by fluorocarbon when fishing wacky rigs because it sinks but mono will work fine.

After the bait his hit the bottom and you have not gotten a bite, pick your rod tip up to bring the bait up in the water column and let it sink back down. You can also add in a couple jerks as your raising the rod up to give it some erratic action.

This will keep some tension on the line so you can detect a bite. Not so much tension that the bait is not sinking at a natural rate of fall, just enough so you can feel a hit. This amount of line tension is sometimes referred to as a “semi-slack line”

You also want to keep a close eye on the line. Sometimes you’ll be able to see the line move and not feel a thing. Whether you feel a bite or see the line moving, it’s important to give a solid hookset immediately.

One of the biggest downsides of these rigs is a lot of anglers won’t feel the bite until a bass has already worked the bait in to its throat. This can make it very difficult to unhook and even worse can be fatal to the bass.

Now if you are fishing the worm weightless it will have a slow, natural rate of fall. This action is deadly most of the time in bass fishing, but there are going to be scenarios where add some weight is required. The obvious scenarios are when you’re fishing deeper water or in windy conditions, but it’s also worth trying if a weightless rig just isn’t getting bites.

A quick sinking wacky worm could trigger a reaction strike. A weighted wacky worm has a lot more action because sinking faster causes the two ends of the worm to flutter more erratically. The wacky rig is a great way to get bites when bass just don’t seem to be biting anything else.

0 thoughts on “The Wacky Worm”

to get great bass lure tips!

Best Bass Fishing Lures is an Amazon Associate, we earn from qualifying purchases.

Sign up to receive emails
with great bass lure tips!