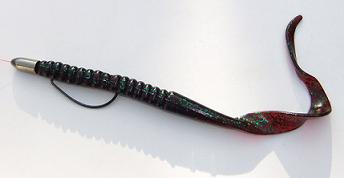 The Texas Rig is by far the most commonly used rubber worm rig. It’s used mostly for its weedless properties, along with giving the worm a nice and straight profile. Traditionally, a Texas Rig is weighted. Though many anglers rig their worms “Texas Style” without a weight while using the weedless feature of the rig.

This is not a complicated worm rig, and to begin you only need a few things: rubber worms, hooks, and bullet weights. You may also want a weight stopper on your line depending on what kind of conditions you’re fishing. If you want to get everything you need for Texas rigging your worms then check out this Texas Rig Kit on Amazon.

The only difference between the two types of hooks when rigging Texas style is the angle at which you enter the worm with the point of the hook. You’ll enter at a 45 degree angle with a round bend and straight in with a wide gap. The video at the bottom of this page will explain that in greater detail.

A 3/0 or 4/0 size hook works well with most worms but if your looking for more information on choosing worm hooks and hook sizes visit the Plastic Worms page.

Weights determine the depth in the water column you wish to target and the rate at which the worm sinks. For the Texas rig, and for most worm rigs in general, you use bullet weights. They slide on the line before you tie your hook and sit at the head of the worm.

There are three ways to utilize a bullet weight: pegged to the nose of the worm, pegged a set distance away from the worm, or sliding freely on the line. How you decided to use utilize the weight will be based on how you want the worm to present itself on the bottom.

There are a lot of factors to consider when choosing weights that won’t get covered here. If your looking for more information on what weights to use for worms visit the Plastic Worms page.

How To Texas Rig A Worm

For this example we are using a wide gap hook. To rig it, insert the hook tip straight through the worm’s nose, penetrating about a quarter inch. A quarter inch penetration is good but ideally you want to match the distance from the eyelet of the hook to where it first bends.

Next you want the hook point to turn 90 degrees and exit out the side of the worm. The side you decide to exit will be the direct opposite side that the hook point will be exposed on when the rig is complete. For basic worms with a round body it doesn’t matter, but for worms that are not rounded and you want the hook to be exposed on a certain side you should take note of where you exit.

Once the hook tip is out, slide the head of the worm up the shank and stop when it reaches the eyelet of the hook. You’re now at the most important part of Texas rigging. It’s imperative that you re-enter the worm at the right location to keep the worm looking straight and natural.

To do this, hold the hook in the upright position from the middle part of the shank, letting the worm hang freely and in line with the bottom end of the hook. Wherever the bottom of the hook lines up with the body of the worm is the distance from the head that you want to enter the worm. Pinch the worm with your thumb and finger, using your thumb to mark the distance from the head so you know where to enter.

Once you have the exact location where to penetrate the worm for the second time your just pushing the point straight through the body. When the point exits, straighten the worm so the tip of the hook will sit in a straight line with the body of the worm.

At this point you’re essentially ready to fish, but if you want to make the rig more weedless you can bury the tip of the hook just slightly under the surface of the plastic. If you want to see this rigging process demonstrated watch the video above.

to get great bass lure tips!

Best Bass Fishing Lures is an Amazon Associate, we earn from qualifying purchases.

Sign up to receive emails
with great bass lure tips!